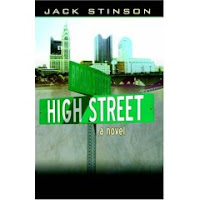 Jamie Boyer sits in a stark homeless shelter in one of the seedier areas just off of High Street, certain that he has messed up his life forever. The young man had left his home on the farm just six months earlier for college in the big city. After falling in with the wrong crowd and getting mixed up with alcohol and drugs, his life is shattered. From the times he attended church while growing up, Jamie knows that he is running from God. The squalor and hopelessness of the homeless culture horrifies him, yet in shame he refuses to call home. Back in Shelby County, Martha Boyer worries about her missing son. She knows that she is not right with God herself, and is guilt-ridden. The occasional church visits have only made her more miserable.
High Street cuts through the heart of Columbus, Ohio. On the way, it snakes along a sprawling college campus offering rowdy bars and good times to young people who have just left home, and slides by dirty, crime-infested areas of the city that most try to ignore.
Can Jamie work his way out of his problems alone⎯and will anything really be different if he gets back to the college bars on High Street?

About the Author
Jack Stinson was born and raised in rural, northern Ohio. After college, he became a technical writer, living and working in several states on the east coast and in the Midwest. For many years he helped with a Christian outreach program for the homeless, which was the inspiration for High Street.
Posted by Karina Fabian at 8:35 AM

Hi Karina! How's the new house? I can't believe you are already back in the swing of things online. Just the normal back-to-school grind puts me out of whack.

A wave to Jack too if he stops by to check out your page.