My Own Kind of Freedom: A Firefly Novel By Steven Brust 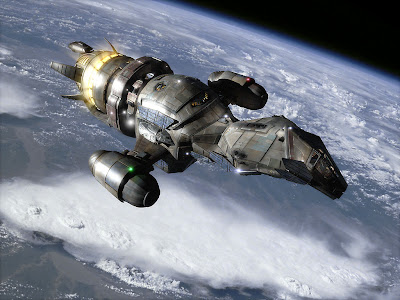 I'm a big Firefly fan, so this week (for no particular reason), I'm highlighting the very cool free novel by Steven Brust, My Own Kind of Freedom.

Since it's published under Common license, there's not fancy cover and very little advertising except through the fan net. I found this summary on Serenity Stuff:

While transporting cut maple to Hera, Mal realizes he’s not quite himself; asking Wash dumb questions, being nice to Jayne. Clearly something is up. Could be because Inara’s gone, could be because this job is taking them back to where he led the fight in the last, losing battle of the war, could be something else. But he’s distracted and jumpy. Zoe is edgy because Mal’s jumpy. Kaylee is worried because of Mal and Zoe. Jayne is impatient to get some time for himself to get drunk and sexed. And River is hearing from ghosts, some more solid than others…

Thursday, I'll post my review. In the meantime, if you're a Firefly fan, you can get the novel here.
Posted by Karina Fabian at 8:53 AM