An Interview With Carole McDonnell 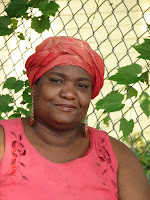 1. What inspired you to write this story?

Several things. An old Elizabethan ballad, "He's young but he's daily growing." The story of Hagar in the Bible. We Christians never think of her as a person living her own life whose life was then interrupted. I suspect we never really care about what the lives of slaves were before they became enslaved. Don Richardson's great missionary book, Eternity in their hearts. There was also an interview I saw with Pastor Richard Twiss of Wiconi International www.wiconi.org and World Christian Gathering of Indigenous People. www.wcgip.org These groups work to establish forms of worship that are more connected to the culture. For instance, Pastor Twiss organizes Christian pow-wows. Most Christians are not Europeans, and yet most of the Christian literature is written by European Christians. In addition, many Christians across the globe have had two struggles: They often have had to choose the religion of their oppressor because Christianity and imperialism were so closely-linked. And they had the European ways of worship pushed on them. Although they had their own ways of worshiping the Creator, they had to use the Lutheran or the Roman or the English ways. It was cultural imperialism. So now there is a large movement among Christians across the globe to understand and worship Jesus through their own culture. For instance, Indian Christians who understand Jesus as the one who frees them from karma and their sin debt, as the one who is the divine Guru and the Light, the Truth, and the Way.


2. Who is your favorite character and why?

I think it's Loic, the male protagonist. He lives in a world where there is a lot of hierarchy, especially in the spirit world. And that is something that is very common in shamanistic societies..the idea that God is so far away, holy, and otherwise preoccupied that we humans can't deal directly with him and we need intermediaries. There is so much of that in spirit worshiping societies. Mountains behind mountains, as some of my Haitian friends say. My main character, Loic, is immature and -- as far as he knows and is able-- a kind of good pagan. He's spoiled but kind-hearted. He's ill. (I always make a point to create main characters with an illness -- emotional, psychological, spiritual, developmental.) He's a Christian-figure, as opposed to a Christ figure. His illness has made him spoiled and arrogant. Plus, he's the son of a clan chief. All this makes him the sort of person who would rebel against the spirits and shaman who want to come between humans and the Creator. So it's a kind of divine arrogance.

3. How have your personal faith and beliefs influenced your story?

I wanted to write a Pentecostal Book of Acts kind of novel. So many Christian novels don't include that and for me, Christianity without the charismatic gifts is merely powerless doctrine. Of course many people wouldn't want that kind of natural supernatural stuff in their books, but that -- I believe-- is what Christianity is supposed to be. Full of power, Christ in us, the hope of glory, treasures in vessels of clay.


4. What was the hardest part of writing this book?

Being brave. I had to trust God that a secular publishing company would accept it. I also had to get the storytelling style right. I wanted it to be high fantasy, but high fantasy with a folkloric style. Not the Euro-tradition. I also didn't want it to sound stilted. I read Native American rhetoric, slave narratives, and old Chinese traditional and classical poetry so I could get the style just right.

The battles with the demons. That was fun to write. I knew instinctively what the demons would say.

I have to decide which of three works-in-progress I'm working on. I have to work on getting some sleep. I battle fibromyalgia so it's interesting writing through the fog and the sleeplessness. I keep thinking that I'm always writing stories where my characters have trouble sleeping. I suspect that when I start sleeping again, they'll start sleeping also.

I'm a couple of days late with the comment. Sorry. However, I found the interview very interessting. You are good at asking the right questions, Karina.

Wonderfully detailed interview. I liked reading about Carole's research. Also interesting is how Carole's physical challenges seem to manifest themselves in characters! That is so cool! (well, the manifestations -- not C's difficulties!).