The Wildcat's Victory by Christopher Hoare 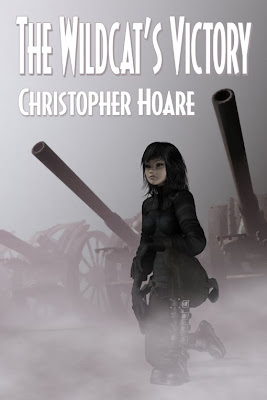 Follow Gisel Matah and the thunder of hooves as she strikes back at the Imperial armies that threaten all she has worked for. She must defy every established world power to bring justice to common peasants and workers in societies now ruled by greedy aristocrats. Her covert activities require her to protect her fledgling Radical movement from both friends and enemies.

Risking her life and her love, Gisel negotiates even greater hazards in a wide ranging adventure. Her partner, Yohan Felger, becomes a problem when the Baron has him smuggle a steam engine to the Empire. Gisel knows of the subterfuge but cannot admit it, while Yohan is almost torn apart by the need to deceive her. Faced with removing the pressure on Yohan as he moves his contraband engine, she accepts the offer of General Lord Ricart, an ex-lover, to command a cavalry unit in battle. Her reckless courage is needed to carry out missions against two Imperial armies.

The fight finds her opposed by ever increasing odds until in the final confrontation she must outwit two enemies who vie to dominate Iskander. New friends, allies, and enemies as well as all the old ones fill the pages when Gisel Matah sets out to gain "The Wildcat's Victory".
Posted by Karina Fabian at 11:01 AM