His Shadowed Heart by Hazel Statham 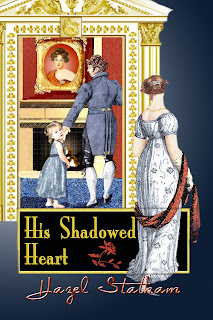 Can a shadowed heart be healed? Can love grow where least expected? The Earl of Waverly believes not. How wrong can he be!

After the death of his wife, the Earl of Waverly, believing his heart irreparably damaged, enters into a marriage of convenience. However, he is not prepared for the healing influence his new young bride has on his life.

Despite the couple’s new-found happiness, nefarious deeds abound and strange happenings are attributed to the ghost of his former wife. Will their love stand the test or will the perpetrator emerge the victor?

An Excerpt:
Traversing the long corridor to his bedchamber, he paused momentarily outside his wife’s door, but as no light shone from beneath, he continued on to his own apartment. Closing the door quietly behind him he paused in the centre of the room. All was in darkness except for the pool of light cast by the candles he held and for a moment, their flickering caught the handle to the connecting door. Yielding to an irresistible temptation, he pressed the handle, and finding no resistance there, entered the chamber.

As in his own room, all was in darkness, but turning to where he knew the bed to be he raised the candles higher so that their glow spread across the room, illuminating the sleeping figure there. Crossing to the bed, he knelt at her side and extinguishing all but one of the flames, placed the candelabra on a small table at the side of the bed.

The shadows of the remaining light played across Caroline’s sleeping countenance and he smoothed a lock of hair that had strayed across her forehead. He knew the desire that his lips should follow his finger’s course, but even in his state of inebriation, he knew this would be foolish. For several minutes, he watched his wife sleep, eventually placing his head upon the pillow beside her. His lips curved into a loving smile as his eyes drank in her sleep-softened countenance and he felt her breath caress his cheek. The longing to hold her became an almost physical thing and his arms ached with the suppressed desire. Eventually she stirred, muttering incoherently in her sleep, and he raised himself up. What foolishness is this, he thought. I am acting like a callow youth, and immediately he was on his feet. Snatching up the light, he went quickly out of the room, closing the door quietly behind him.
~ * ~

Purchase the book at:

Fictionwise - http://www.fictionwise.com/eBooks/eBook69078.htm?cache
Posted by Karina Fabian at 8:25 AM

Thanks for hosting Hazel today, Karina.

Yes, thank you Karina. I very much appreciate being part of your blog.

I love hearing from my readers so if anyone has any questions or comments, please don't hesitate to contact me.