A Review of The Book of Names by D. Barkley Briggs 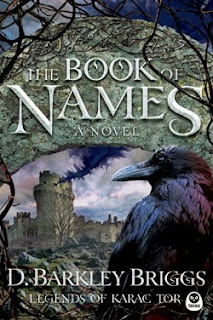 Ancient portals. Myth and magic. What if the old legends were true?

After the death of their mother, teen brothers Hadyn and Ewan Barlow must adjust to a depressing new life. But when a secret viking runestone opens the door to a world in peril, they are given a choice: join the battle or never find their way home.

In the Hidden Lands of Karac Tor, names are being stolen. Darkness spreads. As strange new powers awaken within, will the Barlows reluctantly answer the call to fight? Or will they succumb to Nemesia’s dark spell and join the Lost...forever.

Although it was toured earlier as Christian fiction, The Book of Names is a good book for teens who are into fantasy. Hayden and Ewan are believable and interesting characters that I think boys will identify with especially. I particularly liked how they did not forget who they were just because they were magically transported to another world. (For example, you'll find slang, teenage sarcasm, references to television, etc.) The action starts slowly, but picks up toward the middle. An interesting mix of theology and mythology. I'll be passing it onto my fantasy-loving son.

Posted by Karina Fabian at 6:57 AM