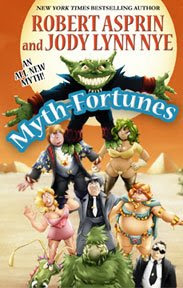 Since I'm doing the Magic, Mensa and Mayhem tour this month, I thought I'd review the book series that influenced the humor of the DragonEye, PI, world:

If you've not read the Myth, Inc. series by Robert Asprin (and now Jody Lynn Nye), go to your bookstore (yes, they are there!) or get on Amazon or B&N and order them! These humorous fantasies chronicle the adventures of Skeeve, the magician with a modicum of talent and a mountainload of unconscious charisma and inadvertent cleverness, and Aazh, the incredibly powerful magician who has sadly lost his powers for the next hundred years as the result of a practical joke gone wrong. When Skeeve's mentor is killed before he can remove the joke curse from Aazh, Aazh begrudgingly takes on Skeeve as his apprentice so that he can at least get around while seeking a cure.

That was 20 books ago and the apprentice had become the Master. On the way, they've thwarted, then befriended, the Interdimensional Mob (fun by the Fairy Godfather), played court magician (stopping a war and giving the position to Skeeve's apprentice, Masha), started their own magical agency, and most recently saved Aazh from getting sucked into a pyramid scheme that was literal as well as figurative.

Robert and Jody have a penchant for puns and a knack for ridiculous situations that will have you chuckling and snorting until people around you start to edge away. (You may not want to read it in airports or subways. Then again, it might be useful...) Robert said he got the idea while watching those old Bing Crosby buddy movies, but all the characters are distinct rich and memorable. The situations are clever, too, and they occasionally venture into serious topics, like Skeeve's brief experience with alcoholism.

Little wonder, then, that I dedicated Magic, Mensa and Mayhem to them and when I needed a back-cover blurb, Jody was the first person to come to mind. (It was thrilled when she agreed! Thanks, Jody!)

Latest in the Series:

Posted by Karina Fabian at 7:19 AM

Love Jody Lynn Nye and not just because she spells her middle name the way I do.

But I haven't tried Myth inc. Have to check it out.

My middle name is Lynn-Gay.

the Myth books are a lot of fun. I hope Jody can carry on now that Robert is gone, God rest his soul and cradle it in the happy laughter he inspired.

Sounds interesting! Thanks for sharing about the Myth, Inc. series.