The Cat That Made Nothing Something Again by James Maxon 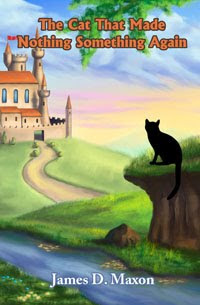 A nameless cat lives in a town of dry, unhappy people devoid of moisture, joy and creativity. How did the townspeople get this way? Who stole the moisture? And how can one crafty cat return moisture -- and life -- to his town? "The Cat That Made Nothing Something Again" tells the tale of how a feline hero discovers these answers. On his journey he overcomes obstacles with wit and determination, finds new friends in unexpected places and learns the simple joy -- and transcendent power -- of helping others.

The house I grew up in was full of cats, and I had an idea to write a fairytale about one in particular named Sam, who was my mother’s favorite cat. I wanted to write a story about him mainly for her, but after receiving such positive feedback from people I decided to put the story into book format.

Speed and time . . . or rather, lack of speed and lack of time. I’m such a perfectionist that I found myself constantly going back to rework the writing rather than just moving ahead and worrying about fixing the issues later.

Writing dialog has always come easily to me. I enjoyed creating the speech of my characters and was constantly delighted to see where they [the characters] took me next.

In the book, I have a character called “the seed”. The nameless cat finds the seed -- which a farmer dropped by accident in the middle of the path -- and tries to help him to no avail. The cat decides that the best course of action is to eat the seed and put him out of his misery. Later in the story we find that the seed becomes the main tool in defeating the dreaded sponges (who have taken the moisture from the world).

I think it’s important for children to learn what it means to be someone of worth, and it is my hope that this book can reach children who are struggling like I did. I try to write in a way that can reach all ages, providing stories that children can understand, yet still giving enough depth and symbolism for adults to relate to.

It is said that an author often does not become famous until they die. Where this is not always an appealing prospect, it does have a strong sense of longevity. When I am long gone, my hope is that my words will remain in the world, showing the truths that I have learned, and changing others for the better.

I'm currently working on a story about a 15-year-old boy who dreams of becoming a wizard. Even though his father is known throughout the land as a powerful wizard, both him and his mother have forbidden Traphis from learning magic. A year after the death of his father, Traphis finds new doors opening and the world of magic more than he bargained for.

It starts out like a typical fantasy story with a young boy living on a farm, but that’s where the stereotypical fantasy ends. My intention is to introduce many new and exciting elements into this genre in hopes of drawing in more readers.
Posted by Karina Fabian at 1:00 AM

I read this little gem of a book a couple of months ago. Nice to see it getting more attention.