Yearly Harvest: A True Story of Christmas by Ryan Callaway 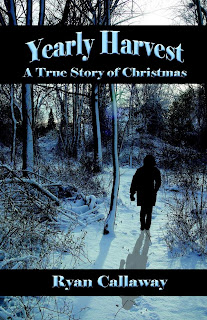 Note: Despite the title, this is definitely fiction.

Jin Duyen, who often writes articles for prominent magazines, is assigned to do a story on the origins of Christmas' many traditions. After some research, she traces them back to Selah, a remote town in the Midwest. Jin travels there in hopes of finding something interesting for her article, and finds so much more. Amy Carson, a private investigator from a nearby town, decides to look into several cases of missing children which have gone unsolved. The authorities have ceased their own searches, so with little else to do during the holiday season, she heads to Selah as well. Oddly, the residents of Selah aren't caught up in the festivities that the rest of the world is taking part in. Jin and Amy soon discover that Christmas holds a much darker meaning here... one that pitches them into the same terror that had held Selah captive for years.
Interview with Ryan:

I wrote Yearly Harvest because I wanted people to seriously consider the traditions that they follow, including those of Christmas. I'm in no way against the holiday, but I believe a lot of Christians blindly engage in certain practices without stopping to consider why. There was a huge controversy over the holiday around the time I started writing, with a lot of folks in the non-religious community pressing to remove Christ and any semblance of Christianity from Christmas. Yearly Harvest explores the idea that, in a way, Christ has already been at least diminished in Christmas festivities. More people probably think of Santa, presents, and bright lights when they hear the word, and not the one it's named for. The book can be enjoyed as a mere suspense/mystery story. But it's also a frightening eye opener revealing what Christmas could be WITHOUT Christ.

The spiritual warfare that I endured from the day I realized the good purposes that Yearly Harvest could accomplish. The attacks were constant, and I almost gave up at one point when my computer unexpectedly crashed. I lost 20 pages of writing and it took me about a month to get back into it, but I did. I figured if the enemy found it worth fighting over, then it was a fight worth staying in.

I really enjoyed the characters, particularly protagonists Jin and Amy. Jin and Amy were, and still are, the most unique characters I've written. They really came to life in their own way, and it was fun to sit back and see how they reacted to the situations I threw at them. They practically wrote themselves in that way, and it was cool to experience that.

There's three things I hope readers get from Yearly Harvest. First is a good, suspenseful read that'll keep them up at night - either because they don't want to put it down, or because they're creeped out. My editor told me that the publisher said she was going to have someone else read the suspense submissions from then on so she could sleep well at night. I took that as an extreme compliment. Second, is an emotional ride, because it's a very dramatic and character driven book. I think the lessons that the characters learn will be beneficial for readers as well. Jin, for instance, starts off as very unappreciative of her family, but by the end of the story she realizes how much they really mean to her. Third, I want people to reconsider the way they think about Christmas. While the other aspects of it may be fun, Christ should be at the center for Christians.

I want to be remembered as someone who is creative and writes real characters that readers fall in love with. An author who is able to scare readers, but make them think at the same time. I would also be honored to one day be mentioned in the same breath as authors like Ted Dekker and Frank Peretti, as my works have drawn comparisons from readers thus far.

I'm currently working on producing a film version of another novel titled "Avenger of Blood". I am also writing a suspense/romance novel called Leviathan which takes places in a quiet southern town. And I hope to revisit Jin and Amy in the near future as well. I've been throwing around ideas for a Yearly Harvest sequel for almost a year now.
Posted by Karina Fabian at 9:51 PM