You Are More Than Enough Achievement Journal-Judi Moreo 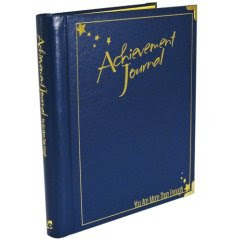 
This week's blog tour is a little different. Judi Moreo has asked that instead of just posting a summary of her book, I share a little about myself by discussing this passage from her book: Every step I take brings me closer to the realization of my dreams

My first reaction is: depends on where I'm stepping. If my dream is to have a model's body and my steps keep taking me to the refrigerator, I'm not gonna realize my dreams. So this statement is as much warning as motivation.

Frankly, it's one I do need on occasion. I have a tendency to check my e-mail again and again, hopeing for a distraction when I should be working on the next story. Sometimes, I take on a project, not because it's getting me closer to my dreams but because someone asked. And, well, there is the refrigerator. However, in the long run, I just get frustrated because I know I've stepped away from my dreams. (or the 'fridge is bare, but that's a different issue.)

This statement also reminds me that we seldom just GET our dreams; we have to work for them, move toward them on step at a time. Since I'm a very task-driven person, this makes a lot of sense to me. I'm pretty good at breaking down my dreams into goals and then steps to the goal. Thus, even though a dream seems vast, each step is very doable.

So let's take an example. My dream has been to write fiction. After completing one (rather lame) novel in college, I took a big detour from that dream for several years until one day, I felt the need to return to that dream so strongly I nearly screamed. (Actually, I think I did yell, "If Turtledove can teach college and write books like this, why haven't I even written one story?") I was a mother of toddlers, and a Reservist, so becoming a famous novelist was out--but I could write a few stories, maybe write for some local magazines...

"Cinders" (which recently appeared in Twisted Fayrie Tales by EternalPress) was written in a month.

My next step was to pull my husband in. We always communicate well with kids around, so dinner dates often ended up rehashing work and home. Bleah. Instead, we started collaborating on stories, building an elaborate near-futre universe where an order of Catholic nuns performs space search and rescue operations for "supplies, air and the Love of God."

I've written several novels--again in small steps. My first novel was written by simply promising not to sleep until I had just one sentence down. it was slow going, but it's done and I have two more complete. One, Magic, Mensa and Mayhem, is due out in 2009; the others are still seeking a home. Again, that's a dream I've broken into smaller steps--right now, a set number of submissions to publishers and agents each month. In the meantime, I'm writing other things and dreaming big.

But no matter how big the dream, it all begins with the one step that moves me toward it.
Posted by Karina Fabian at 7:20 AM