Leaps of Faith: a Christian (not just Catholic) Anthology

I've had a couple of reviewers comment that Leaps of Faith is a book of Catholic sci-fi. This took me aback, because that was not our intention with this anthology. Rather we were looking for Christian stories of all faiths. Our guidelines for the stories were: 1. Great story, 2. Plausible science within the story (no reversing the polarity of a supernova and such) and 3. The science and religion were not inimical to each other.

However, as it turns out, the majority of the stories do have Catholic ideas or Catholic-like settings. Here's a rough breakdown:

Anglican: Comprehending it Not

This was not a conscious decision on Rob's or my part, nor would I saw our religious beliefs influenced our story choices. (We were both faithful but casual Catholics then.) We were reading for interesting angle, not doctrine or particular beliefs--in fact, one reviewer has told me he didn't find the Catholic stories especially Catholic in their proposed beliefs. (Which is fine: unlike Infinite Space, Infinite God, we were not looking for stories faithful to a particular doctrine.) I'd consider only one of my stories, Leap of Faith, to be Catholic. The whole time-travel program in Tampering With God's Time could have been done by another Christian denomination--and the crisis that sparked the time travel program had to do with the continual splintering of all Christian faiths more than the Catholic.
I also advertised about the anthology on more Christian writer sites than Catholic. Finally, some of the Catholic stories are written by NON-Catholic Christians. These authors probably didn't know Rob and I were Catholic, either. We never mentioned it in any of the submission calls.

So why the high proportion of Catholic representations?

The Catholic Church is involved in science. Look in the Catholic Encyclopedia or check out 1000 Years of Catholic Scientists by Jane Meyerhofer and you'll find hundreds of scientists who were not only Catholic, but often priests, monks, and even saints. Pope Pius IX established the Pontifical Academy in 1847, which consists of scientists around the world chosen for their contributions to science without regard to their particular religious beliefs--or lack thereof. Although independent of the Church, the Holy See supports its research financially, and its academicians research and publish papers on a variety of topics from theoretical mathematics to molecular biology. 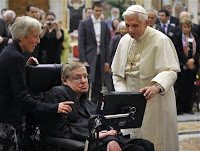 It's an easily identifiable icon: whether you need a pro-life morality, a place receive sanctuary, or a scene of religious peace and grandeur, or (unfortunately) someone to balk against scientific progress, the Catholic Church comes to mind for many, regardless of religious affiliation. The Church is also known to be organized and budgeted. That's the reason I used it for "Tampering With God's Time." I wanted a religion with the right kind of infrastructure to carry out a secret program, and the non-Catholic Christian faiths I'd been exploring (I was in college at the time) seemed too independent and loosely organized to fit the bill.

Finally, Catholic IS Christian--a more ritualized, organized belief than many, but still holding to the basic tenants of all Christian faiths: salvation through Jesus Christ, loving God and thy neighbor, the working of the Holy Spirit in our world, and more. Those are the beliefs we found in these stories, Catholic and non-Catholic.
That's why Leaps of Faith is Christian sci-fi.

Purchase from The Writers Cafe Press OR

Posted by Karina Fabian at 7:54 AM

Thank you for pointing out that the stories are not all Catholic-based -- not that it would matter to me if they were.

I came here after reading a 3* review at Amazon. It seems that the review garnered this rating because "My only problem with this anthology is that uncomfortable feeling that the Catholics are the only people of God."

I am disappointed that the writer chose to base the review, not on the literary merit of the book, but on an apparent religious-based bias.

Imagine the furor that would ensue if someone gave Donita Paul, Ted Dekker, Wanda Brunstetter a so-so rating and said that they felt uncomfortable that the authors seemed to be promoting a protestant point of view.

P.S. I am not Catholic -- but I sometimes wonder if I missed the boat somewhere along the line. I'll have to look more closely at these Christians.

I love Donita's stuff. It's a great story in and of itself. Folks, if you like fantasy and dragons in the tradition of Anne McCaffery, you need to check out her DragonSpell series.

Thanks for the vote of confidence on Leaps of Faith. There are several more reviews on Amazon, and none of them detected a so-called Catholic bias.

When it was an e-book, we had a review that started "I did not want to review this book. I am an atheist and I hate science fiction." She then went on to say how the book surprised her with its fantastic storytelling and gave it 4 stars (her max rating.) It was my favorite review that year. Sadly, I lost the copy and it's no longer on the net, but I'll never forget it, because it tells me how talented writers can cross boundaries.