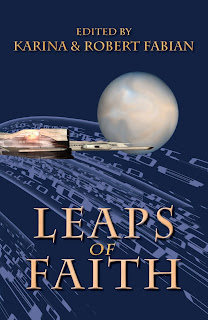 Leaps of Faith was first published as an e-book back in 2002. It was a finalist for the EPPIE for best anthology and garnered some very nice reviews. Here are the snapshots:


From: http://www.denisemclark.com/scifirevdata.html
Reviewed by Michael Bogert
Seldom does a book come along like Leaps Of Faith, where science fiction is blended with Christianity to produce excellent stories to inspire and enjoy. Karina and Robert Fabian, editors, have brought together several stories written by as many authors, that are based on the Christian faith.

The book was a real delight to read, and the authors wrote their stories well. It was easy to become immersed in each tale as they followed one common theme. Some were not as jubilant and happy, but each possessed an important moral, or lesson to be learned.

In some of the stories the authors had clearly studied and researched modern (and ultra-modern) technology, or had been educated in that particular area. Above all, the mixing of Christianity was a very refreshing change from the norm.
I give Leaps Of Faith two thumbs up, and I look forward to similar works in the future. To Karina and Robert I say, well done.

TimelessTales.net: "This is the first collection I have read in years where I can say that I truly enjoyed each one of the stories. I heartily recommend them to the discerning reader."

Dog-eared Webzine: "Highly Recommended! ... the stories engrossed me from the beginning. Though SF/religious in nature (as stated by the publisher), each story managed to be more than that. They cover the gamut of human experience--doubt, faith, adventure, and conflict...It poses intelligent questions and offers honest answers. This is a book designed to make you think, and it achieves its goal."

Author's Choice Book Reviews: "This is a collection of stories from authors who explore many different aspects of science and faith, and what that all means when science makes another discovery, or when we reach out to alien races... I found the collection over-all thought provoking and a good read."

MyShelf.com: http://www.myshelf.com/scifi_fantasy/03/leapsoffaith.htm.
By Jo Rogers
There is a prevailing myth that science fact and religious belief are incompatible, although most proponents consider as fact things that are as yet unproven theory and many scientists find their research confirms, rather than destroys, their faith.

With this in mind, Francis Isadore Electronic Press presents Leaps of Faith, an anthology of Christian, science fiction stories. Most of the authors here are Catholic, so questions are explored from the Catholic point of view, but most apply to all points of view in the Christian faith. How will the aliens accept it? Better yet, will we be allowed to take it with us into space? Many of these stories speculate on what will happen when Christians explore beyond our world.

There are several scenarios here, from an alien trying to bring the faith to his world, the acceptance of AI androids into the church, the murder of the faithful by the ungodly and the use of one’s faith to bring about a miracle with the aid of technology. The possibilities are legion, but in all of them, known science facts are presented accurately. They are also realistic, in that all of the endings do not culminate on a miracle from God that comes about without human and technological aid.

I found this book quite interesting. I highly recommend this book. It not only entertains, it makes you think.

Purchase from The Writers Cafe Press OR

Posted by Karina Fabian at 6:44 AM

Just checking in sis. It's too bad it's your book we're touring. You always post great stuff.