League of Superheroes by Stephen Rice 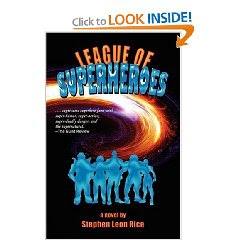 The League of Superheroes

Four teenage boys and one little sister discover someone in a chat room who claims to be a little girl named Genie, but whose scientific knowledge and technology are a few centuries ahead of anyone else.

Who or what is Genie? The most intelligent mortal in history—an integral part of the most powerful force mankind has ever unleashed. And she does not consider herself subject to the laws of God or man.

On a whim, Genie transforms her new friends into the League of Superheroes:

Titan—a walking and flying tank—is Rod Davies, a klutzy, diplomacy-impaired beanpole who is also a certified genius in math and physics
Darklight—an invisible spy—is the narrator, Tom Reilly, a scientifically inclined polyglot
Tachyon—able to speed or slow time in his area—is Allen Peters, super-hacker
and Micromegas—a size-changer—is Charlie Taylor, who hopes someday to be a medical missionary.

And then there are Clarice Peters, Allen’s little sister and perhaps Genie’s best friend, and "Uncle," the mysterious elderly man who was the first to treat Genie like a human being…

But can even superheroes save her (and the world) from her so-called creators—and from Genie herself?

Review by Karina:
When it comes to Christian superheroes, I'm really more of a Larryboy fangirl, myself. It's very hard to make a Bible-quoting superhero work, in my humble opinion. Bibleman, for example--could anyone take that show seriously? Batman meets a revival of stereotypical proportions. I wouldn't even bother showing that to my kids--they'd laugh and not for good reasons like with Veggie Tales cartoons.

Well, if you'd like your kids to read about Christian superheroes they can identify with, I recommend Steven Rice's League of Superheroes. Here's a fun easy read about a band of teenage kids (plus one little sister) who meet a cyborg supergenius online. Genie gifts them with supersuits based on their favorite comic book heroes, setting them up for trouble with the mega-corporation who created Genie and intend to keep her--and any of her inventions--for their own nefarious purposes.

Oh, did that read like a comic book plot? It should. Steve was very obviously having fun with the comic book stereotypes, as well as the unbelievably intelligent-yet-doomed-to-endure-high-school cast of teens. He nonetheless crafts an enjoyable read and keptt he characters from becoming perfect geniuses, a la Wesley Crusher. I especially liked Rod's misadventures with his suit. The heroes at times strayed into unbelievable goodness, yet still had some of the common foibles of teenage boys--a certain disdain for little sisters, a penchant for getting into trouble, and the like--that kept them from becoming caricatures rather than characters.

If you like plausible technobabble, you'll love this book. Steve is very careful to give scientifically possible methods for each one of the supersuit's capabilities--and does a good job of explaining them. Makes me want to go back and check out a quantum physics book. He also gave each suit a limitation, which I appreciate. Can you imagine how insufferable a teenage boy with the perfect supersuit could be?

Steve also does his best to represent a tapestry of Christian beliefs, as the characters are Catholic, Baptist, Assembly of God and non-denominational, and he does a fair job of representing all the beliefs in a valid and positive light. Since the story is told from Tom's point of view, it has a decidedly Protestant angle. I found some of the religious dialogue and events a little heavy-handed for my taste, especially toward the end, but not enough to call it sermon-in-a-story. (One of my pet peeves.)

Steve has a nice, straightforward writing style that's good for the middle reader--I'd recommend this book for 4th or 5th grade and up. Plus, Steven, on occasion, comes up with a killer line: I felt like a Biblical character who had just received a patriarchal blessing—honored, mature, strong, and above all, so scared that I needed to use the bathroom. He also has a lot of skill with ending a chapter in such a way that you want to turn the next page, so watch out if you read this as a bedtime story to your kids.


Check out these other member blogs this week for more info.

Posted by Karina Fabian at 7:39 AM

David said...
This comment has been removed by a blog administrator.
7:38 PM

I'll try this again and hopefully not get deleted. I truly appreciated Karina's insights in her review of LEAGUE OF SUPERHEROES, by Stephen Rice. I appreciate her dedication to the group and to the various writers, no matter what their backgrounds. As long as they love Jesus has always been good enough for her...and me. God bless you sis.

Karina--
I've only seen Bibleman's packaging in Christian book stores way back when I still spent time looking there for Biblical spec-fic. I judged a book by its cover, and from all accounts, got it right.
Rice's League of Superheroes cover is LoAdS of Spiff--that's what LoS originally stood for I've heard.
8D
Seriously, I've read it. Good stuff.