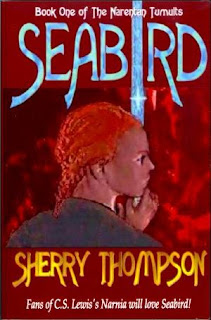 About the Book:
When high school senior Cara Marshall is transported to Narenta, she is proclaimed champion of its people against the daemagos-a cadre of sorcerers. Amid the grateful welcomes, Cara protests that neither the title nor the mission are hers.

"They've got the wrong person and they're going to get me killed because they won't admit it."

Is Cara's world-napping a mistake? The daemagos don't care as long as she's
dead. Cara's brief attempt at finding a way home mutates into a nightmarish
blur of hiding and flight from remorseless enemies. Pursued by ruthless werewright warriors, vicious serpent-hawks, and the sorcerers, she is simultaneously overwhelmed by the trust the Narentan people show in her alleged power as the Outworlder and their champion. In whom dare she place her own trust when assassins lurk in the shadows amidst those who welcome her?

As she races across an eerie and perilous ancient world in search of the daemagos' secret power, Cara must also find the strength to face tragedy, grief and doubt. With little time left to aid the Tethran kingdom and her remaining companions, Cara grapples to perceive the essence of a hero's heart and make it her own.

Grounded in the tradition of C.S. Lewis, this character-driven first installment of The Narentan Tumults is an epic tale of adventure, courage and faith.

About the Author:
Sherry writes: The broad framework for all of my planned Narentan Tales was inspired by Lewis's Chronicles of Narnia and by the mythopoeic writings of the Inklings. With Narenta, I envision a relationship between worlds resembling the one Lewis used but with my target audience both young adults and adults. I love The Chronicles of Narnia! They were the final step that led me to Christ. Even so, I've often wished Lewis had paused before writing The Last Battle to allow some teens and young people to visit Narnia before he wrote its "final" -- or "first true" chapter.

Check out these other member blogs this week for more info.

Posted by Karina Fabian at 6:55 AM