Danger at the Door by Michelle Sutton 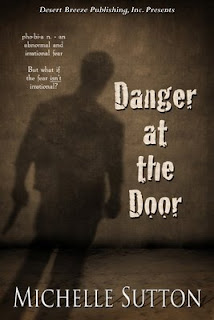 Upon her fiancé's death, Laney became a recluse who only left her home for emergencies. She managed to survive - barely - on food delivery service and her work-at-home job. When she tries to move on from her grief, the commemorative meal she orders is ruined. However, it leads to an unlikely friendship with an attractive man, Bojan, who speaks little English.

As he befriends Laney he continually says the wrong things, but he doesn't give up trying to win her trust. Meanwhile, she has this strange feeling of being watched and wonders if she's losing her mind.

Complicating things further, every time she leaves her house something bad happens, confirming that she is safer at home. Can Bojan convince Laney she'll be safe with him, or will his presence put her in further danger? Will he be able to protect the woman he loves before it's too late?

This might sound crazy, but I'd been talking to my agent about writing a category romance and I was trying to think about what might be fun for me to write that wouldn't be too edgy. There was this handsome guy who worked at the KFC in my town who always said hi to me and I thought about how it would be fun to write a story about a guy who worked in a restaurant but actually owned the restaurant even though he seemed like a regular employee. Then I thought it would be fun to hook him up somehow with a gal who seemed rich even though she wasn't wealthy but just had a nice house she inherited but couldn't afford. So he thinks she is rich, she thinks he is poor. That's where it started. Then when I actually started writing the book I decided to make English his second language but decided Spanish is too easy and wanted something that even had a different alphabet. I decided to go with Macedonian because I met someone briefly who I thought would make a great hero. I had a writer friend who lived in NYC who was Albanian and she spoke/wrote Albanian, English, Greek, and Macedonian. So I basically wrote the story and consulted with her on the particulars. It was fun to write. There will be a sequel called In Plain Sight that is about the hero's sister. That will release in April 2010.

What was hardest about writing it?

The hardest part was waiting for my friend to write me back. She worked full-time like I did so there would be a delay sometimes in getting my chapters back.

What was the most fun?

The most fun besides writing the English blunders was writing the scenes with the Chihuahuas. You have to read the book to find out why. Hilarious!

What do you hope readers get from it?

I hope readers will learn to overcome some of their fears as the heroine has a fear of leaving her house and getting in a car accident. Ironically, while writing this story, I met two different people who said they were afraid to leave their house. That must have been providence because that helped me, too, with my characterization.

What about thrillers and romance appeals to you as a writer?

I like romance because I love romantic tension between men and women. I love reading it and enjoy writing it. I don't much like thrillers unless there is more than just a bunch of chase scenes. I like meat in the story. Something that makes the characters think about their lives and what they are living for. That is stuff I enjoy reading and writing. Simple thrillers do nothing for me.


Available on Amazon or click here.
Posted by Karina Fabian at 3:52 AM