The Sin of Addison Hall by Jeffrey Onorato 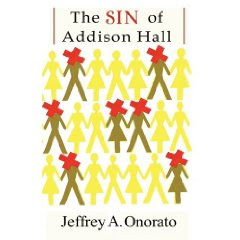 Breaking the Mold of a Traditional Hero Results in a Gripping Tale of Fiction... First-time author soars with his spellbinding story of a man fighting with human nature... Residing in a country where beautiful people are considered superior, Addison Hall is an anomaly. A mildly repugnant man, he is forced by the twisted hierarchy of his dictator to live in less than adequate living situations. The days become increasingly arduous as he toils in an unpleasant job, stricken with the disappointment of his current situation. Besides the dark comedy of his disastrous attempts at romance and his friend s antics, Addison s life is fairly dull. Then he meets Otka, a beautiful woman who owns the local coffee shop. After witnessing a chance encounter where Addison risks his life to save the life of a dog, Otka takes an obvious interest in him. Addison is perplexed by her reciprocated intrigue. Past experiences with such a valued creature of the opposite sex has left him tainted and doubting her motives. Jeffrey Onorato sensationally draws us into his world of relatable characters and witty dialect. He victoriously shatters the conventions of the true-blue hero to create a story that has both depth and originality. The Sin of Addison Hall entrances the reader with delicious conflicts of human wanting and wavering uncertainty with an ending that will leave you begging for more.

An Interview With Jeffery:

Because our society collectively is superficial. We celebrate (and therefore value) physical beauty over all other individual qualities and its not getting better, rather its getting worse. I believe dangerously so... We are beginning to devalue those citizens that don't "tickle our fancy" with their appearance and if the moral slide continues, it could have horrific consequences.

One's ability to gather and show-off their wealth is a close second (and the theme for my next novel).

What was the hardest part of writing it?

In a word, "re-writing". I revised The SIN of Addison Hall 5 times, paragraph by paragraph, over the past 3 years. For me the act of creating is a wonderfully fun process, the act of refining... not so much :)

Additionally "letting go" of my novel was difficult. It will never be perfect although it is what I strive for... even now, reading the finished version makes me cringe because there are so many things, miniscule details, that I would love to change.

What was the most fun?

Finishing the first draft and realizing that I had communicated, albeit clumsily, the story that had been ricocheting around my mind like a bee in a mason jar for 10 years. It was thrilling.

Why a dystopic world?
Because I believe that is what will accrue given time and warped values. I was careful not to create a fantastical society because it would denude my warning. By morphing our existing society into a familiar but dangerous one hopefully haunts my readers and causes them to re-evaluate their own value system.

What's next for you?
I have just completed a draft of a novel that explores what horrible choices an individual will make when they choose "mammon" as their god. Now the re-writes start...yikes!
Posted by Karina Fabian at 4:00 AM