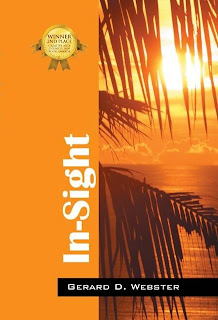 Ward McNulty had it all…his own syndicated column, the love of the beautiful co-anchor for Channel Five News, and powerful friends—including congressional hopeful, Chet Garner. But in his pursuit of wealth and fame, Ward had distanced himself from his traditional Catholic family—especially his father—a common man with very uncommon insight.

State Senator Garner convinces Ward to support the conversion of the sleepy island town of Timuqua into an exclusive resort to be named “North Beach.” However, this pits Ward against his own father—a resident of the island—in a bitter eminent domain battle. Too late Ward learns that North Beach’s financial backers are not who or what they appear. And when Ward balks at being asked to slander his father’s attorney, he suddenly finds himself blind, broken, and charged with DUI manslaughter. Overnight, the whole structure of Ward’s “successful” life comes crashing down around him. He loses his job, his girlfriend, his eyesight, and is about to lose his freedom. When all his former “friends” abandon him, Ward turns to the only man who’ll stand by his side—his father.

In the meantime, North Beach’s financial backers will stop at nothing—including murder—to get what they want. In the ensuing struggle, Ward learns the secret of his father’s uncanny insight and the true meaning of sacrificial love.

In-Sight is the story of fall, forgiveness, and redemption…of deeply instilled family values triumphing over a culture gone awry…and of a lost son coming home. It’s for anyone who believes that God has a hand in destiny and is not completely surprised when He draws back the curtain for a brief instant and allows a glimpse at another reality.

Q. Why did you write this book?
R. About three years ago I was on a silent retreat. One of the meditations was on the gospel of the talents and we were challenged to think about what talents we had that we’d never used for the Lord. My BA was in English Lit., but I’d never done much with it. By the time the retreat ended, I decided to try to write fiction—but fiction that would serve the Master. However, I had no idea of where to begin. So I turned to prayer and meditation for inspiration. All I got in return were intrusive thoughts about a movie one of my kids had rented called Shallow Hal. It was about a very superficial young man who judged everyone by their looks—their beauty or lack thereof…until he was hypnotized to see their inner character rather than their outward appearance.

Every time I tried to think of something to write about, the memory of Shallow Hal kept pounding at my mind’s door. Finally I discussed it with a spiritual mentor, and he suggested that—instead of purging the intrusive thought—I should go with it and see where it leads.
That night I got home, grabbed a pad of paper, and starting writing down “What if” questions. What if a man really could see inside others—their character instead of only their looks. What if a worldly, selfish, sinful man could see the condition of his own soul…whether he was alive with divine grace, dead in mortal sin, or “wounded” by past sins? How would that affect him? How would it affect his relationship with others?

From that thin thread of an idea, the plot for In-Sight was born.

Q. What was the hardest part?
R. Initially, the hardest part was in trying to come up with a scenario in which the protagonist, Ward McNulty, could develop in-sight into his own and others’ souls. It had to be placed in a context that made it believable. Before even beginning, I did some research into other men who had actually possessed this gift—Don Boscoe, Padre Pio, and the Cure d’ Ars—to name just a few. Then I coincidentally happened to read about a woman who was temporarily blinded after being thrown from a horse. So I did some research on temporary blindness caused by trauma. When I put these two together, I was able to come up with a plausible scenario in which a formerly healthy young man might be temporarily blinded—and in which his “sight” would be altered when he emerged from his physical blindness.

Q. What was the easiest or most fun?
R. I really had a lot of fun with a minor character, Emma Lee Wheeler, who plays a significant role at the end of the novel. She was an elderly black woman who worked nights on a hospital janitorial staff so she could help her daughter and two grandchildren. She was also a spiritual delight—a very kind woman who reflected God’s love on everyone she met. She and Ward developed a bantering relationship while he was hospitalized after his DUI accident. The give and take of their exchanges was a lot of fun to write. I was smiling almost the whole time—and I watched my wife smile, too, when she proof-read the novel and got to that part in the book. I think it was the most fun I had while pounding out the story.

Q. What do you hope people get from your book?
R. I hope that they’re entertained. Otherwise I would have written pure apologetics. But by weaving a moral into an entertaining tale, I hope that the moral will make more of an impact.

Most of all, I hope that the readers will recognize the spiritual realities of their own souls—that it might cause them to look inside and wonder what they would see if they had in-sight. I remember a saintly friend of mine once told me the story of how he had asked God to allow him to “see” his sin. How God granted him that grace—and how he wept bitterly for hours afterwards and was finally consoled beyond anything he’d ever experienced by the sense of overwhelming love and forgiveness.

The other thing I hope readers get out of In-Sight is some sense of God’s love for us—no matter what we’ve done—the knowledge that He can and does forgive all…if we just ask.

Q. How do you want to be remembered as an author?
R. I’d like to be remembered as a man who could spin a good yarn with a good message. If all I had wanted to do was to entertain, writing In-Sight would have been a lot easier. I love the old classics that weaved a moral seamlessly into the thread of the story so that the reader absorbed it almost without being aware that it was happening. That’s a goal of mine. Hopefully, as I write more and become better at the craft, I’ll be better able to emulate those masters of yore.
Posted by Karina Fabian at 1:03 AM