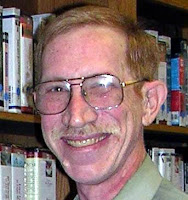 Tell us a little about yourself:

I'm happily married to Barbara Ann, yes that really is her name. We've been married for nearly 34 years and have 2 grown children, one daughter-in-law and one grandson who will be 2 this August. I'm a retired correctional officer, now a part-time library clerk and a licensed minister with Soar Like An Eagle Ministries. Oh yeah, I write a little too.

Actually I've been writing for a long time. In the late 70s I wrote a sci-fi trilogy that is not yet ready for submission. I've written tons of poetry, songs, articles, editorials, most of these have been posted on the web or, as in editorials, in our local paper. THE 3RD COVENANT is my first published novel.

Where did you get the idea for the Church of the Third Covenant, the cult which s murdering people in the "name of God"?

Well, let's start further back. In 1973 or 74, while living in Springield, MO. a priest was killed with a bayonet (and yes it was in a bowling alley). I never did like the way that case was concluded. The boyfriend was let off, the woman was given Murder in the 2nd Degree. So that's where the bayonet comes in.
Then, while working as a correctional officer I ran into an inmate who headed up his own church. That was the bases for The Church of the 3rd Covenant, although let me rush to say that neither this man, nor this church did the vile things mentioned in my novel. So in answer to your question the idea is a culmination of several things in my life, real things, which I fictionalized.

How much of yourself do you see in your main character?
When Nat is talking and almost forcing the Gospel on May, that's me. When he loses his temper, that's me too. When he learns to trust in God, even that's me to a point. I guess if I really knew kung fu and had lived in the Orient at one time Nat would be like a twin. As it is he's more like the image I would like to see of myself, not the one I have of myself. So even for me Nat is a role model.

Why write this story?

Again, to answer this question we need to travel back in time. In 1973 I created a character called "Nat Adams" which I hoped would be a Christian comic book hero. I even drew up a few comics. My art work leaves much to be desired and that idea was scrapped.

Then in 1980 or there abouts I started a collaborative work with Marc Burns. The name "Nat Adams" was again chosen as the hero. This time we began with his history and gave him a complete background. I can tell you where Nat grew up, what he was like and how he became who you find him to be in my present book.

That collaborative work was never completed as I moved away before that could take place. Marc still remains a close personal friend who has graciously allowed me to utilize all the ideas, descriptions and other work we put into the collaborative together without claiming any personal recognition. When I retired from corrections I had a lot of things going on in my head, but it was actually after reading some great mysteries by people like Jeffery Deaver and Harlan Coben that propelled me into writing a mystery of my own. I wrote it to have fun, to show people that Christianity can be fun as well as to show them the life of a Christian, warts and all. While there are many things I wished I'd have done differently, such as learn how to use the point-of view properly, I am still proud of this work. I'm proud because it marks a beginning. I've had one person suggest that I re-write it when I'm out from under my current contract. You know Karina, I think I'll leave it just the way it is, to remind me of how easily it is to make great mistakes and to help me to remember where I came from. Should I become a best-selling author, something I am aiming for, I want to be able to look back on this work and say, "Ugh! I can't believe that was me." And in that reflection be encouraging to new authors as they come to me with questions. I want to leave my book the way it is to keep me humble. Does that make sense to you?

I'm currently working on another "Adams/Wish" novel. With the help of some others both here and on another group, not to mention the help of one of my co-workers at the library, I'm currently doing my 3rd re-write. I hope to be presenting it to publishers for consideration by mid-summer, or perhaps to an agent.

I'd like to also say that since reading LIGHT AT THE EDGE OF DARKNESS, compiled by Cynthia MacKinnon, I plan on both writing some Biblical speculative fiction of my own as well as inserting some of these elements into the future "Adams/Wish" novels. Exactly where I go, well, as always, that's up to the Lord.

One thing I'd like to say before we conclude here is that I believe with all my heart that the story I told in THE 3RD COVENANT is the one God gave me. It's a story about a believer's struggle with faith, a non-believer's struggle with their own beliefs and a love that truly does endure all things. The parts of this novel that people enjoy are those parts that God helped me write. The parts where there are errors or it may seem to get off track (or the POV makes things hard to follow), well, that's me. I take credit for the errors and give God the credit for what is not in error.

Anonymous said...
This comment has been removed by a blog administrator.
8:13 AM

Christian Fiction Review said...
This comment has been removed by the author.
9:12 AM

Thanks Karina, those are great questions... and David, that's some bravery to answer them as you did. Well done, both of you...
Grace