You Can Lead an Atheist to Evidence by Ray Comfort’ 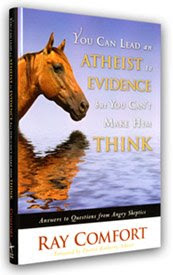 To be an atheist is to play Russian roulette with all barrels loaded.
An atheist can’t win. Of course, he feels and acts like a big player, until the trigger is pulled.

The issue isn’t the existence of God. If the atheist is wrong and there is a Creator, then he was wrong. He gambled and he lost. No big deal. The real gamble is that there’s no hell. That’s what makes the player sweat just a little. “What if?” is the deep and nagging doubt. He believes it’s worth the excitement of the game. Yet atheism isn’t a mind game; it is intellectual suicide.

We know that there are six bullets that aim right into the
brain of humanity:

1. Creation. Could you believe that the book you are holding came into being without an author? There was nothing. No paper, no ink. No cardboard. No editor. No author. There was nothing, and then a Big Bang changed everything. Time (the magic ingredient) produced a book with a cover, binding, coherent words, page numbers, and chapters, all in perfect order. Such thoughts are truly insane. You cannot have order without intelligence creating order. And there cannot be an ordered creation without an intelligent Creator.

2. The God-given conscience. All sane people have a conscience. It comes with the package. It is an inbuilt judge in the courtroom of the mind. It makes moral judgments, even when its voice is not wanted, and its voice only addresses that which is moral. It doesn’t speak when my tie doesn’t match my shirt. But it does speak when I steal a tie from a store. Why is that? Where did the conscience come from? Why do all civilizations have the knowledge that it’s wrong to lie, kill, steal, etc.? Our social surroundings may shape the conscience, but they don’t create it. It is the inner light that God has given to every one of us, and it leaves us without excuse for our sin.

3. The unchanging testimony of Holy Scripture. Do what they will to the testimony of Scripture—paint it as an ancient and archaic book, say it is full of mistakes, that it has been changed down through the ages, that it says that the earth is flat—but it remains the unchanging Word of the Living God. It is His Book, and it is a lamp to our feet and a light to our path. Refuse its wisdom, and you walk in darkness at your own peril.

4. The true and faithful testimony of the genuine Christian. These are not people who believe in God. Rather, they are sinners who have come to know Him. The Christian is called to testify as a witness to the truth. As in a court of law, the judge doesn’t want poetic or flowery speech. He simply wants to hear what the witness has seen and heard. It is then up to the jury to believe or not believe his testimony. The atheist chooses not to believe the testimony of the Christian, and in doing so, accuses him of bearing false witness. But why would a Christian lie? Why would he want to be found a liar, when the Book in which he sincerely believes warns that all liars will be cast into the lake of fire?

5. The witness of Jesus Christ. The True and Faithful Witness, before Whom every knee shall bow. The challenge to any atheist is to read the testimony of Scripture. Any honest skeptic will have no choice but to come to the conclusion that “never a man spoke like this Man.” He claimed to be God in human form. He claimed to have the power to raise all of humanity at the resurrection of the dead, with His lone voice. He claimed to be pre-existent, and that He came down to this earth to do the will of God. To make such claims, He could only have been a simpleton (that doesn’t match His matchless words), a liar (that doesn’t match His impeccable moral teaching), insane (then billions down through the ages have followed the teachings of a madman), or He was who He said He was.

6. The Spirit of Almighty God watches every thought and every deed and will bring every work into judgment, including every secret thing, whether it is good or evil. No one will get away with a thing. No murderer will go unpunished. No rapist will get away with rape. Perfect justice will be done. But the justice of Almighty God is so thorough He will see to it that thieves, liars, fornicators, blasphemers, adulterers, and all who have transgressed the moral Law (the Ten Commandments) will get equity—that which is due to them.

Death is the trigger that will send eternal justice like a speeding bullet into the heart of the sinner. It will end the game of life in a heartbeat, and no second chance will come. So, if you are an atheist, let me reason with you. You cannot win. Think about your life. Think about eternity, while you still have time.

Posted by Karina Fabian at 8:03 AM

I hope that Comfort continues to receive all the press he can, because I believe he's creating atheists with his risible "proofs", particularly his infamous banana proof.

Cheryl said...
This comment has been removed by the author.
7:29 PM

Thanks for hosting Ray, Karina. He asked me to send this along to you and your readers.

For years I have held a coke can in one hand and a banana in the other, and compared the two (I have done this in Yale and other universities when I have spoken on the subject of atheism). Both have a tab at the top. The banana has a wrapper with perforations, is biodegradable, has outward indicators of inward contents--green too early, yellow, just right, black--too late, etc. It was a parody; the point being, if someone designed the coke can then obviously Someone designed the banana.

I put it into a booklet form ("The Atheist Test") and sold over a million copies. Then Kirk Cameron and I put it into our TV program. However, atheists removed the coke can, and sent the clip all over the Internet, saying "Ray Comfort believes that the banana is proof of God's existence." They really made a monkey out of me. I became the laughingstock of atheists all over the atheist world . It was very embarrassing. The below is typical (PZ Myers is a biologist/atheist):

"The banana man thinks he's got atheists on the run. Category: Creationism • Kooks: Ray Comfort has a new site, www.PullThePlugOnAtheism.com It's a series of short pages which consist mainly of plugs for some bad books he is peddling, with a few paragraphs in which he announces a few of his misconceptions about atheism, with the air of one who has trounced every objection. It really is as bad as his pathetic blog."

But here's the amazing irony. Atheists have unwittingly given me a huge international platform. I was interviewed more than 80 times about my new book--including the BBC (worldwide) and The Alan Colmes Show. You Can Lead an Atheist to Evidence but You Can't Make Him Think, rocketed up the Amazon.com rankings on its first day of release, moving from No. 69,572 to No. 38 in 24 hours. The book was also the No. 1 book in the categories of religion and atheism on “Darwin Day,” bumping Richard Dawkin’s famous book. Secular radio stations have been extending the length of their interviews because there was such interest in the shows. I have started a daily column for a secular site called Examiner.com (http://www.examiner.com/x-3329-Creationism-Examiner/) in which I am called their "National Creation Examiner." They have thousands of "Examiners" but it seems that (for some unknown reason) quite a few are interested in my column. In the first week, the national average page views for all the Examiners was 2,141. My column was viewed an incredible 12,125 times! So this is a wonderful opportunity to take the gospel to those who normally wouldn't darken the door of a church. Each time the column is viewed, one penny is donated to Children's Hunger Fund (I had them donate it to them). Please feel free to check it out regularly, and at the same time help to feed a hungry child.

I never thought that I would have ever thank God for that dumb banana video, but I truly do. What was intended by atheists for evil, God has turned out for the good."

Thanks, Robert and Ray, for an interesting discussion. Cheryl, thanks for passing on Ray's reply.