It's Not About Him by Michelle Sutton 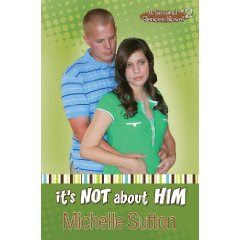 When Susie discovers she is pregnant, she has no idea who the father is. She considers having an abortion, but decides to place her baby for adoption instead. Following through ends up being more wrenching than she'd imagined, but she's determined to do the right thing for her baby.

Is this a sequel to "It's Not About Me"?

What can readers expect from this book?

Readers will participate in the emotional journey with Susie (the heroine) that parallels her decision to place her infant for adoption. Instead of having an abortion, she decides to have her baby but knows she can't take care of it. So she does an open adoption. Most people are only familiar with closed adoptions. This story is about a covenant agreement between the birth mother and adoptive family and the way and open adoption (done correctly) should look. This is an option that more teens could take if they were aware it existed.

My favorite scene is probably the one where Tony approaches Jeff (hero) the first time about his desire to be intimate with his girlfriend and his emotional/physical struggle with doing the right thing. I love how these guys discuss the particulars. That was fun to write.

Who's your favorite character?

In every book it's Tony. I love him because he is real, he's honest, but he's also human and frustrating. He's fun to abuse, too. I admit it. But that makes him loveable to me because he is always searching and like St. Paul, he asks himself "Why do I do the things I don't want to do and not do the things I should?" Though in much of book one he's just an idiot, he does change over time, but still struggles like we all do.

Coming in Sept 2010 is It's Not About Her, the final book in the series. This is Tony's story, and in my opinion (as well as several other people who have read it), the best book of the three. Why? Because you finally see the world from his perspective. Up until this book all you know about Tony is what other people hear and think about him. By this time readers really want to see Tony happy. I show how difficult that is to achieve for him, but how much more rewarding it is as well - because he worked so hard to get there.

Posted by Karina Fabian at 3:59 AM

This is a great interview with Michelle.

I really believe that one of the best ways for us to help others deal with issues like teen pregnancy and other things that seem to be everywhere is to write about them. At fiction, it is easier for people to read, but you get across the same message. Well done. Keep on writing.