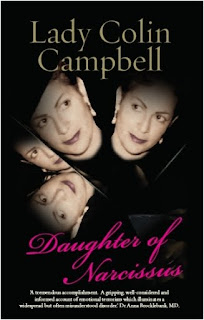 Daughter of Narcissus is a stunning analysis by Lady Colin of her own dysfunctional family positioned at the heart of upper class Jamaican society from the middle of the 20th century to the present day. Covering the end of the British Colonial Age and the rise of a liberated generation, whilst addressing the narcissistic personality of her mother, the author brilliantly interconnects the sociological, political and personal. As she dissects the family dynamics lying beneath the appearance of wealth and power, Lady Colin’s understanding of personality disorder is revelatory: compelling the reader to comprehend the destructive and tragic reality concealed by rational language and behavior.

Set against a backdrop of glamour, wealth and fame, this compulsive book is both a fascinating history of one socially prominent family, and a uniquely detailed analysis of narcissism, its manifestations and how to survive them in order to lead a purposeful and affirming life.

Why did you write the book?

Daughter of Narcissus was not my idea. The suggestion that I write it came from the eminent American psychoanalyst Dr. Erika Freeman. She thought that I could make a contribution of value to a subject, narcissistic personality disorder, that at the time (three or so years
ago) had been little addressed by professionals much less by those who had lived through it.

At first I baulked at the prospect, not only because I am not a professional psychoanalyst/psychiatrist/psychologist, but also because I felt it would violate my mother in writing a book about her. Erika convinced me that there would be no disloyalty in writing the truth about my mother, for she was already dead, and the experience I had gained as a result of her problems might help others who were living through or trying to recover from what I had survived and managed to turn into something psychologically and spiritually enriching.

What is your favourite part?

I cannot say I really have a favourite part. The book needs to be taken as a whole, for it is an amalgam of so many varied traits, qualities, blessings, curses, failings, and it covers such a wide spectrum of experiences and periods that the sum of the whole is greater than any of the parts, in my view.

What was hardest to write?

One must remember that I am a professional writer who has written many books, so writing comes as naturally to me as typing does to a secretary.

On a more personal front, because I had been through therapy many years ago, and had therefore buried all my ghosts, there was no one part of Daughter of Narcissus which was particularly hard to write.

I do feel, however, that it would have been impossible, rather than merely difficult, to write the book had I not been through the cathartic process which good therapy is.

Personality disorders are very damaging to everyone who encounters them, and I cannot conceive of any writer doing justice to a subject that is so complex, conflicting, contradictory and turbulent without first having gained a degree of emotional distance and serenity through therapy. I would go as far as saying that personality disorders are not fit subjects for writers to use as cathartic vehicles, for the damage they can do to others as well as themselves can be great indeed, unless they are in command of both themselves and their subject. And such command does not come through off-loading one's pain on a reading public which will often be vulnerable, but in healing yourself and understanding not only what you suffered, but what your perpetrator also suffered. In a word, compassion rather than judgementalism or emotional dumping will ultimately be more productive not only for the writer but also the reader.

What do you hope readers get from your book?

I hope they gain knowledge they did not possess before they started to read the Daughter of Narcissus, as well as confirmation for the instincts they have or have had when dealing with people who suffer from narcissistic personality disorder and its related personality disorders. NPD is quite a difficult disorder to cope with, and I hope that by being as honest and open as I have been, readers who might be in positions that are similar to that which I and my siblings and other relations were in vis-à-vis Gloria, will somehow benefit from my experience. I don't pretend that dealing with NPD is easy, or that it is painless, but I do hope that by the end of the book those who are locked into relationships with NPDs will have gained sufficient tools to lighten their load and maybe even to begin the process of liberation.

It may not be possible to have a truly good relationship with an NPD, but I found that it was possible, if one drew the lines very definitely and faced what one was dealing with constructively and positively, that I could have as good a relationship with my NPD as her disorder allowed. So instead of it always being dreadful, or of her usually making me feel dreadful, one could draw what little good existed out of the relationship, while minimising the inevitable discomfort.

Daughter of Narcissus is the second book in a row I have written about an anti-heroine, the first being Empress Bianca, about a double murderess who evades being tried for her crimes but finds that public odium for her actions is so great that the world instead of a cell has become her prison.

I think a change of pace is appropriate as well as desirable, so after I have promoted Daughter of Narcissus I shall be embarking on two separate projects. The first is an intellectual indulgence which will most likely make me not a penny, but will bring such pleasure that I will not mind. It is editing an eighteenth century memoir of a French royal who had strong views on how Louis XV1 and Marie Antoinette reacted to as well as mismanaged their responses to the Revolution, with a foreword which will explain the characters involved and their significance in what has already gone down in history as the first great revolution. In my view there has been far too much partisanship in considering the French Revolution and its main players, and now that sufficient time has elapsed for consideration to be given to each participant in an even-handed way, thinking people should be able to digest and incorporate the facts and contradictions without becoming so polarised that they adopt unnecessarily pro-royalist or -republican positions.

My second project will be the indulgence of another interest. I
suspect it will have far greater general appeal. I have been
commissioned to update and expand my 1986 Guide to Being a Modern Lady.

Posted by Karina Fabian at 1:17 AM

Thanks for hosting Georgie Campbell today.