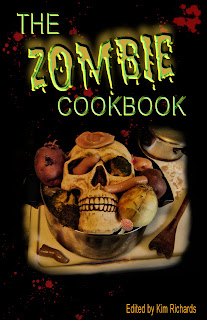 Lin Neiswender does a turn-about is fair play story with "The Right Recipe."

Lin knew from childhood, with the rich language of her Alabama surroundings firing her imagination, that she was destined to be a writer but lacked the courage to follow through on her dreams until her later years. She now lives in Central Florida and the climate must agree with her, as she has finally blossomed into a bonafide writer. Her work has appeared in Flashshot and will be in the upcoming anthology "Vicious Verses and Reanimated Rhymes: Zany Zombie Poetry for the Undead Head," with more work to follow. Lin spends her spare time collaging, cruising the Internet, and playing with her Shetland Sheepdog who thinks it is his job to try and kill the mailman. She can be reached though her website Land of Lin at http://landoflin.blogspot.com

I started chuckling when I read the title, so I knew it was the project for me.
Not being an especially blood and gore kind of gal, I thought humor mixed in
would be just right for that anthology. I couldn't resist sending the call for
submission on to Carla Girtman, also published in the anthology. I knew she
would appreciate the unique juxtaposition of zombies and recipes. It turned out
to be a zombie year for both of us.

What was your favorite part of writing the story?

Working in the humor was the most fun; leavening the gruesome aspects was
important to me. Can't have a zombie without the dangling body parts, but I
wanted a different spin to it with the humor.

Do you like zombie tales? Why or why not?

I can't say that I was a great reader of zombie fiction. In fact, I had to go
brush up on my zombie facts and mythos to write the story. Then I made my own
vision of the creatures-- what any writer is expected to do.

What else do you write?

I write speculative flash fiction and poetry, and have several novels in
progress. I recently joined a crit group which I hope pushes my boundaries and
helps expand my publishing credits. I'm a closet literary fic gal so that may be
my next venture.
Posted by Karina Fabian at 3:04 AM

Nope. It drew me in, too! How much fun is cooking with zombies? Come on!