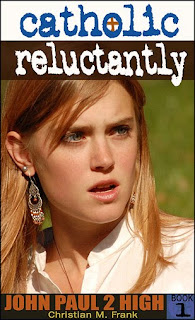 When their parents decide to start a new high school,George, Celia, Liz, J.P., Brian, and James are all thrown together, although they have almost nothing in common. George and Celia attended the local Catholic high school, Brian and James were homeschooled. Liz just wants to attend a school where she can play sports, and J.P. just wants to make trouble.

Then there's a shooting at the local public high school, and Allie Weaver joins the class ...

What I love about this book is that just because the kids are in a Catholic school--a small "upstart" school begun because (it's surmised) the local Catholic school was secular in its thinking and curriculum--doesn't mean that they are isolated from the world or some kind of cliché of Catholic children. They do say the rosary, and they learn to apply Catholic teachings and philosophies to their lessons, but these are kids anyone can identify with. There's the jock, the beauty, the practical joker, the disdainful know-it-all, and the peacemaker. They have fights, break the rules, go to the school dance at the public school (and have fun). They have insecurities, crushes, and teenage angst. In other words, these kids are as real as kids you'll find in any school today. That makes for a great breeding ground of stories.

"Catholic, Reluctantly" is a great start. We see the kids in the first day throes--and the teachers, too, as they deal with the problems of starting a new school in an old (formerly abandoned) building. John Paul's practical jokes don't help the school's situation, either--especially when he brings in a cow on the day an inspector shows up!

Of course, the biggest adjustment is for Allie, whose mother forced her to attend because Allie had been held at gunpoint at her old school by someone in a costume. With the gunman still at large--and possibly among the student body--she's relieved to attend John Paul II high, but misses her friends, her old classes, and her boyfriend, captain of the wrestling team. However, as she gets to know the kids as JP II, especially George, also a wrestler and a sweet guy, she starts to see things differently. No, no sudden major change for "Catholic goodness" but a very natural and gradual realization that maybe her boyfriend isn't quite the Prince Charming she thought he was. (He is a jerk.)

George and Brian (another JP II student who had been homeschooled until then) join the public school wrestling team. Again, the situation is treated with realism, as George makes assumptions about his skinny, homeschooler friend, and appoints himself "protector" with disastrous results.

This is another book I passed on to my daughter, Amber, who has been homeschooled, Catholic schooled and is starting her first year at the public high school. She's identified with the characters to the point that she dreamed about them while reading the book. She found the plot exciting and believable. She begged me to get the next one even before she'd finished reading the first.

Sophia says of the JP II series: "It's about time Catholic teens have a fiction series they can call their own." It's true that Catholic kids will identify with the kids in JP II high, but I'm not sure I'd limit my readership. The issues addressed in these books are ones all kids face, and their responses are good examples to anyone. Not to mention, the book is just a great read.

Posted by Karina Fabian at 1:07 AM