John Paul II High: Trespasses Against Us by Christian Frank 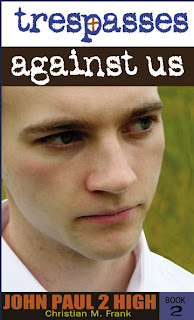 Spring semester at the first year of John Paul 2 High, it seems to Celia Costain that almost EVERYONE is dating: except her! Her parents don't allow dating, and Celia's mostly fine with that -- but that doesn't make her life much easier. Because she's the principal's daughter, everyone seems to think she's perfect. And when scary things start happening to her friend Allie, no one seems to want to tell Celia what's really going on!

As for George Peterson, his conflict with Tyler Getz is far from over. As Tyler targets more JP2HS kids, and threatening messages on Allie’s cell phone appear with alarming frequency, George starts wondering how long the good guys have to wait before they’re allowed to strike back?

As events escalate, George finds himself waiting for Tyler to cross the line so he can serve out justice … but the only person standing in his way is his former best friend: Celia Costain.

Another terrific book in the John Paul II High series. Christian Frank takes on topics from teen dating to school shootings. I loved how the characters continued to be real kids; there was no perfect Catholic schoolkid portrayals here. As such, readers identify with the kids and what they're dealing with. I had a hard time putting it down, and indeed, swiped it from my daughter's room so I could finish it! Definitely a series to collect.

Interview with the Author: (Christian Frank is the pen name for a team of writers. One of the writers of Trespasses, Andrew McNeil, speaks to us today)


Ryan and I (and Johnny, author of books 1 and 3) have been on the JP2HS development team since “the beginning”, several years ago, when we all met around a small table in Regina’s kitchen (why is it that so many great Catholic endeavors have begun around someone’s kitchen table?) to hash out the concept. I’ve known Ryan for 15 years, and it was an extremely easy and enjoyable process tag-teaming Trespasses with a good friend. We wrote over the course of months, through many ups and downs regarding the series’ future (thanks be to God they seem to be worked out now), on two separate computers in the same room of my home. Although we were both tasked to concentrate on separate viewpoints (I wrote George; he wrote Celia), there was a constant exchange of ideas about story and character, so you can truly say that all of the book belongs to both of us, and really to the entire JP2HS team. These characters, their lives, motivations, and futures have been a part of OUR lives for a long time; I’m glad you and your daughter are enjoying them so much. Spread the wealth! Tell everyone about us!

On to your questions.

Personally, I’ve always been a bit down on the quality and character of products made specifically by Catholics or Christians, meant for mass market consumption. This is just my opinion of course, but I’ve found the Christian book, movie, or album that competently entertains while it informs or glorifies to be pretty rare. I’m sure we could all name our favorites, but I’ve heard many “readers of faith” tell me they feel like they have to “settle” for some types of Christian entertainment because they feel compelled to avoid all things secular (a view I don’t necessarily share, but I can sympathize with people who feel that way; it’s often more trouble than it’s worth carefully picking your way through the minefield of non-religious media, some of which is brilliant and some repulsive, and often both). Even things produced specifically for the “serious” Christian community are often spotty in terms of quality, or are simply under-produced – there’s only so much production money to go around, after all.

So I was happy to agree to write book 2 when the opportunity arose. I had been attending JP2HS group meetings for some time, and I knew the characters and tone we wanted. Especially important to me was Regina’s insistence that we weren’t writing a “girl’s book” or a “boy’s book”, and we weren’t limiting ourselves to Catholic readers (although we knew, realistically, the majority of our readers would come from that audience). We were also trying to avoid pandering to a too-young age group – while adults aren’t our target audience, I’d hope that our books are entertaining and refreshingly “real” to adults (judging by all the “I read this book with my kids and we both loved it” type of responses, it seems like we’re achieving that goal). I look at this series as an opportunity to put out something authentically Catholic, faithful to our Holy Father, the Magisterium, and the long-standing Traditions of the church, that mixes high quality with a strong moral underpinning. Despite the uncommon situations our JP2 kids find themselves in, much of what makes the books compelling is a sense of realism – these characters live in a real world, with real people that aren’t always good or bad, and where the best thing doesn’t always happen.

To answer the question, then: I hope Catholic teens (and adults) reading our books will, first of all, enjoy themselves and have a good read. I also wanted to give something to the Catholic community that would reflect the experiences of real Catholics in the real world, while at the same time addressing issues within both the Christian and secular worlds, which are really the same world. Finally, I hoped to provide a positive and truthful image of Catholic teaching and thought to our readers outside the Catholic community, all while never compromising on the beautiful truth which is Catholicism. I think it’s safe to say that’s what all of the JP2HS team members are hoping for.


What was your favorite part to write?

I’m a humor kind of guy, so I enjoyed finding the funny little moments to write about. On the other hand, I liked the action scenes too, particularly the ending. For those of you who’ve read the book, I hope that doesn’t sound weird! My favorite scene from Celia’s point of view was actually right near the beginning – the description of daily life in the Costain house.

You have some pretty heavy scenes in this book—how difficult were they to write?

Perhaps not as hard as you might imagine. In fact, I found those particular scenes easier to write than some of the more day-to-day ones. For me, the hardest parts of writing are the little annoyances: making sure everyone is where they should be at a certain time or place. Getting the little details of setting just right. Describing mundane facial expressions. Big action or suspense scenes, on the other hand, seem to roll off the pen, so to speak. I usually get those correct on the first writing.


Would you have wanted to go to John Paul II high when you were a teen?

That’s a tough question. I went to public school all the way up until college. I’d never been to a private school, Catholic or otherwise, and my only exposure to home schooling were two friends (a brother and sister) who used the Seton program (excellent, by the way) for high school. I didn’t have the experience at the time to realize just how much secular culture informed everyday life in the public schools. I was Catholic, but not as courageous or forthright about my faith as I should have been. My faith was tremendously strengthened during my college years (at Christendom in Front Royal, Virginia), and I looked back on some of my high school experiences with horror and sadness, all the more because I hadn’t realized at the time just what I was missing, or what I was doing wrong.

On the other hand, I learned a lot from those bumps and bruises about how the secular world really works, its strengths and weaknesses, joys and terrors. My time at Christendom was in some ways the polar opposite, but not everything was completely different. My experiences in both environments helped me to learn which actions and attitudes, shared at both types of schools, arose from human nature, and which were the product of a good Catholic upbringing or surroundings. It also gave me a realistic window into both secular and Catholic thoughts and ideals, and I value that knowledge. In fact, in terms of writing the JP2HS series, I consider it one of my greatest assets.

My wife and I home school our own young children, and I would certainly consider sending them to a good Catholic private school like JP2HS before I would a public school, even though our public schools in this area are really good places. Public education is a mixed bag at best, and while I don’t doubt that it’s for some people, it’s certainly not for us. And of course there’s all the government intervention, forced secular culture, and poor standards to consider.

Even given all that, though, I wouldn’t trade my personal experiences in public school. That’s easy to say in hindsight, of course, when I’m sitting here happily married with two great kids, a bunch of solid Catholic friends, and at one of the best parishes on the planet. The teenage me might have jumped at the chance to escape the popularity rat race that is public school, or might have equally balked at a total student population of seven!


What's next for the kids of JP2HS?

Hmmm . . . so many secrets to keep. What can I tell you? Well, book 3 takes place entirely over the summer between the previous school year and the next, and is told from the viewpoints of Allie and Brian. Allie is dealing with fallout from the shooting, and Brian has his own problems. You can probably find out everything I’m allowed tell you at the official JP2HS website. Book 4, which Ryan and I are starting now, starts the next school year from George’s and Liz’s perspectives, and promises to include much in the way of surprises that . . . uh . . . I can’t tell you about. Let’s just say that life at JP2HS won’t be as easy as it used to be for our friends there. But then, life never is.

Regarding Catholic entertainment, I should say that ever since I've been involved with the JP2HS project I've become more aware of quality Catholic literature and novels for all ages, not the least of which are Regina's own books. I used to think there simply WAS no good, modern Catholic lit. Now I'm more of the opinion that it's out there, but sometimes hard to find. And of course, there are unfortunately still poor efforts out there that get published anyway, simply because they have the words "Catholic" or "Christian" attached to them.