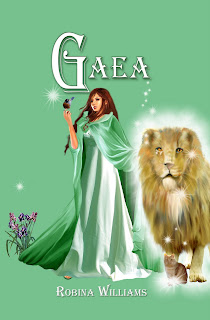 The heavenly Design Center is where it all happens: new worlds, new species, are planned and built here, prototypes are tested, and the creations are sparked into life. Earth's greatest inventors, craftsmen and artists work here among the angels, contributing their skills and ideas. There's a great restaurant, too, with Saint Lawrence himself, patron saint of chefs, cooking personally for distinguished visitors. Among whom, one fine day in early summer, is Earth’s goddess, Gaea, dining in the company of Quant the seraph and saints George, Sebastian and Stephen—for the Lord's family is large and varied, and all its members are expected to get along together. Mostly they do get along, though Gaea is hopping mad at the way she has been treated by mankind lately. She herself has been the subject of a brutal assault, her animals, birds and fish are suffering, and her environment, her very fabric, is under attack.

The goddess decides to hit back and show Man that he needs to improve his behavior, in his own best interest. She calls in her relatives to assist her in persuading humans to mend their ways before they cause irrecoverable damage: men must learn to share earth’s resources and respect the planet that supports them. “Mister don’t care” must be made to care.

I wrote this book because I felt strongly about mankind’s degradation of earth and the harm that humans are doing to their fellow inhabitants of the planet. Because I don’t have the knowledge to write a scientific treatise, I decided to personalize the issue: I would write about Gaea as mother of her pantheon—mère de famille—and the difficulty she and her progeny were facing when a newcomer to earth began behaving so selfishly as to threaten her entire realm. Now I come to think about it, maybe for Gaea and her family it was somewhat akin to having a new and troublesome neighbor—or rather, a neighbor that had suddenly turned troublesome, for she had had no quarrel with early Man. Early Man had understood that Earth needed nourishing and caring for, but later Man had forgotten that Earth sustained him and that he needed, in his own interests, to look after her. If he overexploited her resources and damaged her environment, then he himself would ultimately suffer. Gaea—Earth—wondered why he failed to grasp the obvious.

Gaea is my somewhat alternative take on the problem of human activities harming the planet. I have never been quite sure that the ancient gods ever went away—I saw no reason why they should—and so I decided to use the old deities to cast fresh light on a matter of significance to us today. On my web site www.robinawilliams.com is an article I have written about my blending of the classical world and our twenty-first century world, with the gods helping to mend an environment we have damaged in our headlong rush for technical progress: take a look at Gaea Hits Back, on http://www.robinawilliams.com/Gaea_hits_back.html

What was your favorite part?

I especially enjoyed writing the scenes featuring the Lord and His seraph Quant. I felt that there was a relationship there. The seraphs, archangels and other angels, having all been created to serve their Lord, were given different tasks. The angels did as they were bid, of course, but they had preferences, and some of them found earth duty uncongenial. Not so Quant. He liked humans and happily lived among them at his Master’s behest. His Lord was appreciative of the sacrifices His faithful seraphic servant made and of his willingness to take feline form so as to blend with friary life. And the Lord was amused by the little jokes the quantum cat played on his beloved friars.

I also greatly enjoyed writing the final scene, where the entire cosmos joined in praise of the Lord of Life, species and stars alike raising their voice in thanks to their Creator, and the Lord, God of All, expressed His delight at hearing this universal harmony by stretching out His hand and lighting the heavens.

What was hardest to write?

I find that the beginning of a book is the hardest part to write. One has to structure the opening scene in such a way that it grabs the attention of readers, compelling them to want to read on. The very beginning has both to set the scene and to point to future possibilities. Also, of course, the author is introducing characters—probably the main characters in the story—and they need, to my mind, to be portrayed in a sympathetic light, so that the reader will identify with them and will be keen to know what happens to them later on.

What do you hope readers get from it?

My hope is that Gaea manages to convey a sense of the inclusiveness, the interconnectedness, of creation. People—indeed, creatures of all types—may look different from each other and differ in their nature, but all were brought into being by the Lord and are loved by Him in all their variety. Life is a network—perhaps literally, with the cosmic filaments; nothing lives in isolation. Mankind needs to realize this; Man is part of an ensemble, part of a divine symphony—again, perhaps literally, for each star and planet has its own signature note. The Lord is making heavenly music, and humanity is one of His players. Man needs to coordinate his activities with those of his fellow inhabitants of earth. As Gaea says in my book, “There’s plenty for everyone. I’ve resources enough…” Man needs to share; if he monopolizes Earth’s gifts, then there are stresses and strains which ultimately adversely affect Man himself.

I am now writing the fourth book in my Quantum Cat series. I am also trying a ghost story but I’m not sure if this will work out.

Finally, I would like to say thank you, Karina, for giving me this opportunity to talk about my books on your book blog, Virtual Book Tour de 'Net.