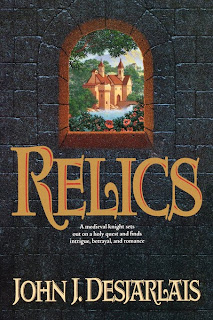 Relics tells the story of Jean-Michel d'Anjou, a young disinherited knight who tries to save the Sword of St. Martin in a burning cathedral but fails. However, a perfect cross is burned on his shirt, which the bishop takes as a sign that Jean-Michel should go on a quest to find relics to replace those lost in the blaze. Consumed by an impossible longing for the lovely baroness who finances the venture, Jean-Michel travels with a mysterious troubadour and wandering scholar to Crusader Palestine, where he becomes entangled in a terrorist plot to assassinate King Louis IX of France.

An Interview with John Desjarlais:

After writing “The Throne of Tara” (Crossway Books 1990), set in Dark Age Ireland , I became interested in the rich trade in relics during the Middle Ages. These treasures of bone, cloth, and small possessions (rings, swords, shoes and such) were guarded by kings and monks, bought and sold for exorbitant prices, stolen, fought over, counterfeited, and, of course, used widely in devotions. Every cathedral altar had a relic embedded below it; every knight’s sword contained a relic in the pommel. People traveled long distances on pilgrimages to be near the remains of famous saints, seeking spiritual renewal or particular favors, especially healing. As a Protestant (at the time; I’m a Catholic now)), I was fascinated by this Catholic practice. The greatest relic of all was, of course, the Holy Land, which was fought over during the 200-year period of the Crusaders’ occupation of Palestine. My other historical fiction revolved around the collision of cultures, and the clash of Christianity and Islam in this period seemed strikingly contemporary. It’s more so now, post 9/11.

The research was daunting, especially in the age before the Internet (I worked on it in 1991-2). But I loved exploring in libraries and museums, and research always revealed new plot possibilities. The hardest part, as usual, was getting out of bed early in the morning, at 4:30, to write before my day job as a media producer began at 8:00.

The most fun in writing fiction is finishing a scene that you know really works. You read it over and it comes alive, even to you, and you ask, “Did I just write this?”

A few hours of entertainment with some learning along the way. There isn’t a deep ‘message’ in the story, apart from, perhaps, the protagonist’s real quest to be accepted by his critical father and discovering that God the Father accepts him as he is. But like the troubadours of the period, I mainly wanted to tell a good yarn with some intrigue, danger and romance.

I think I want to be remembered as a faithful and godly Catholic, a loving husband and caring father and grandfather first. As an author? I hope people regard my work as smart, stylish, and soulful – maybe even worth reading more than once.

I’m working on two things. First, a sequel to my recently-released mystery BLEEDER (Sophia Institute Press) that features a minor character from that story, Latina insurance agent Selena de la Cruz, as the protagonist. VIPER, told against a rich tapestry of Aztec mythology and Mexican Catholicism, deals with the rural drug trade. My other project is a chapter in a forthcoming book that considers the work of J.R.R. Tolkien in relationship to books of the Bible. I’ve been asked to examine how St. Paul’s ideas about the nature of sin as discussed in The Letter to the Romans are exemplified in The Lord of the Rings.

Posted by Karina Fabian at 5:48 AM