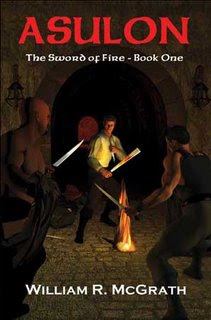 Summary (as found in A Frank Review)
A fantasy trilogy comprised of ASULON, ERETZEL & APOCALYPSE


The story begins in a society that resembles the western world during the decline of the Roman republic. Prince Daniel is driven from his homeland after his father is assassinated. Seeking safety, Daniel sails to the land of his maternal grandfather Anak. Anak is the last of the /Grigori/, a third group of angels who remained neutral during the war between the angels loyal to God and those rebelling with Lucifer. After the war, the Grigori were banished to the earth to live in mortal bodies. Anak's sons are the Anakim, giants unequaled in battle.

Traveling with Daniel are: Simon, a priest of the Lord Yeshua whose powers hint that he is more than a simple priest, and the Swordmaster Moor, Daniel's teacher and head of the king's bodyguards. Moor has sworn revenge on the powerful men who ordered the king's assassination. Also on the voyage is Rachel, a princess of the land of Eretzel and one whose songs carry healing gifts from God.

On the voyage Daniel and Rachel fall in love, but are later parted when Rachel's homeland is invaded. Working behind the scenes are philosophers, rich merchants and sorcerers, each moving to shape events to his own end. As old powers fall, new ones rise and the despotic Antiochus becomes Emperor of the West. The Anakim discover that the Magog, a people of the far north, have been breeding creatures that are half man and half beast for their use in war. The Anakim also discover how they themselves are linked to the terrible secret of these creatures' birth. The Magog plan an invasion of the gold rich Southlands, but Eretzel stands as a bridge to those lands and must be defeated first.

Buried far below the Great Temple in the capital city of Eretzel is the Sword of Fire, the weapon first used to guard the entrance to the Garden of Eden after the Fall of Man. Antiochus is searching for the sword. Daniel is told the secret to retrieving the sword and must keep this weapon out of the hands of Antiochus, less the dictator use it to bring all mankind under his control. Armed with the sword of fire, Daniel evades the men and creatures sent by Antiochus, while searching for Rachel throughout Eretzel and the lands that surround it.

The story ends with a battle between East and West in the valley of Megido, the return of the Lord Yeshua to rule the earth and a view of the first thirty days of the Millenial Kingdom.

Purchase at Amazon.com
Posted by Karina Fabian at 6:56 AM

Of course all that doesn't happen in the first book. I was a bit disappointed at the end of Asulon because it wasn't exactly the happy kind of ending. Like The Lord of the Rings, however it all ends up after the third book, there will be loss. With any victory that they may earn, some sadness and passing of certain things will come.