The Oxbow Report by Mike Purington 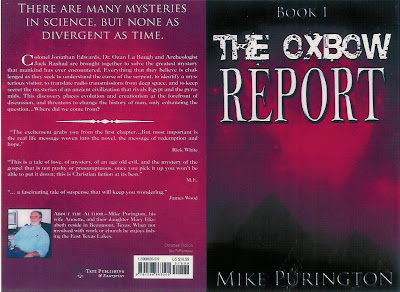 It’s the year 2041 and NASA is on the verge of launching Challenger, their first manned deep space vehicle equipped with light drive technology. The shakedown cruise and the testing is interrupted by the crash of a TRC1200, the most technologically advanced aircraft of its kind, an unexplained event in the weather, radio transmissions from deep space, and the discovery of an ancient civilization that rivals Egypt and the pyramids. All this and more take Colonel Jonathan Edwards, Dr. Ozan La Baugh and Archeologist Jack Rashad through a series of events that calls into question all their learning, and forces them to think outside the box. The discovery of an ancient plan for man places evolution and creationism at the forefront of discussion, and threatens to change the history of man as he knows it. This and more is just the beginning as the crew of Challenger attempts to solve the mystery of Oxbow and the ancient civilization that predates time itself.

To Order, go to http://www.mikepurington.com/order.htm
Posted by Karina Fabian at 11:49 AM