Finding Hollywood Nobody by Lisa Samson 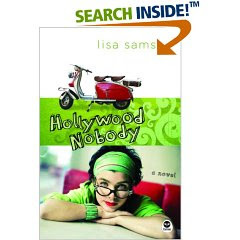 Scotty Fitzgerald, oft-neglected daughter of well-known Hollywood food stylist Charley, knows the “inside scoop” about the Hollywood stars we can’t get enough of. Having spent her life in an RV driving from set to set while her mom “styled food” for celebrities, Scotty sees what the fans do not. And she reveals it regularly on her Hollywood Nobody blog, though she’d rather be as far away from Hollywood as anyone can get. After all, Scotty has enough drama in her own life!

After learning that her ‘mother’ is really her grandmother, Charley finds out her real parents were probably killed in a mafia-style shooting reminiscent of The Sopranos. Scotty’s now certain a sinister “Biker Guy” who’s continued to track her and her mom must be connected to her parents’ shooting. There’s a pretty good chance, she decides, that he’s looking to finish the job by taking her life.

So Scotty and Charley do what they’ve always done—run and avoid the situation. But a life on the run is exhausting and Scotty’s had just about enough—enough to ignore Charley’s motherly direction and chart her own course. Let’s just hope it isn’t a course that puts her in the crosshairs of her own parents’ murderer.

Available on Amazon.com
Posted by Karina Fabian at 9:16 AM