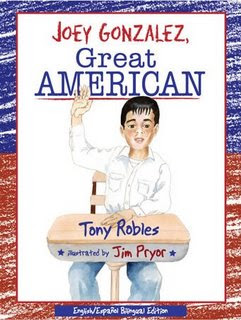 How can I become a great American if I’m not an American in the first place?”

Third-grader Joey Gonzalez dreamed of becoming a great American. His plan? Study hard and learn everything he could. Then one day, his teacher said that because he was something called a “minority,” he wasn't smart enough to make his dream come true! Still, something called “affirmative action” could help him, she said…

But as Joey taps into the strength, intelligence and courage of his Spanish ancestors, he learns that personal pride, self-reliance and a love of learning—not special preferences—are the keys to becoming a good citizen…and a great American.

Order at http://www.worldaheadpublishing.com/
Posted by Karina Fabian at 10:34 AM